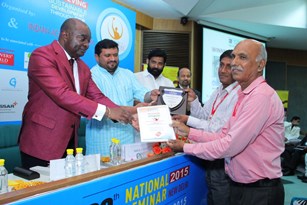 Gramin Mahila Vikas Sansthan Secretary Shankar Singh Rawat was honoured with Bharat Gaurav Award for outstanding achievement in education, health and social services. The award was presented to him during a function on the sidelines of 39th national seminar of Economic Development Forum in New Delhi on September 10, 2015.

GMVS has received this award with the support of various funding agencies who have given it grants for rural prosperity. This award appreciates work being done by GMVS for rural upliftment.