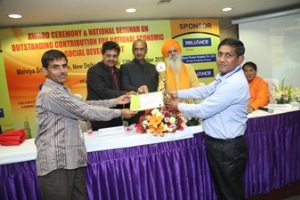 GMVS secretary Shankar Singh Rawat was honoured with Fame Excellence Award at the national level. He was given the award by the Foundation for Excellence Mass Environment, New Delhi, during a national level seminar and award function organised on December 13, 2015.