GMVS Honoured for Work with SHGs 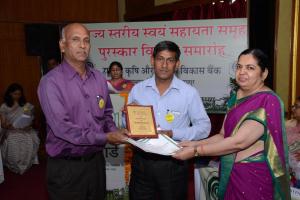 GMVS got this award for playing the important role in the promotion and credit linkages of SHGs and in the overall rural development. This was possible only due to support of various funding agencies like NABARD, The Hans Foundation, New Delhi, Sir Ratan Tata Trust, Mumbai, and Centre for Micro Finance, Jaipur, etc.

This award will encourage us in promoting SHGs and their bank linkages and help empower millions of poor in the country.