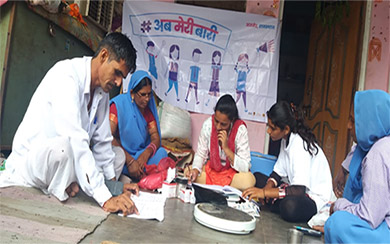 The Gramin Mahila Vikas Sansthan, with the financial supports of Aravali-Jaipur, Preksis and Dasra , has now organized the program- Ab Meri Baari in 10 villages of Lamgara and Bubkiya gram panchayat in Bhinay block of Ajmer district. This project is start from 1st April, 2019.

Girls and their parents were made aware through village level meetings and events on girl child health, education, domestic violence, girl rights in this program.

Meetings with girls - Weekly, monthly, fortnightly meeting was organized with the girls to make them health conscious, in which detailed information about sanitary pads used during the period of menstruation and use of sanitary pads, napkins or clean clothes was given. Aware of the precautions to be taken. Motivated about the intake of iron tablets to meet the lack of bleeding during menstruation. The benefits of using the iron tablets were explained in detail by the girls champion by talking them with them. Meetings with parent of girls – The girl’s champions organized sit-in with the parents of teenager-teenagers, giving detailed information on their health, education and insisted on getting education for their bright future. To keep them healthy, focus was on balanced diet.Mobile voice– In this activity online surveyed on mobile voice toll free number. In which teenager-teenagers was informed about the health issues and other knowledge.Training of Teenagers – Teenagers training organized at village level. In which aware to them for health all facilities knowledge which provided from health centre to them and encouraged them for take available services. Focus on reasons of inhuman evils.Bus Tour- Bus tour is organized by girl’s champion of local organization of ARAVALI- Jaipur, Preksis- Delhi and Dasra organization at district level offices of Ab Meri Baari Program workplace. Field facing problems knowledge gave to them.